Aspergillosis is the type of infection which is caused by a kind of mold and the respiratory system of the patient is hampered significantly by the illness resulting from Aspergillosis infections. The symptoms of the infection vary greatly. The mold that triggers the condition is referred as Aspergillus and it is available everywhere indoor and outdoor. Usually the strains of this mold are not harmful, but some strains are there which can cause serious illness. It affects those with poor immunity, underlying lung diseases. 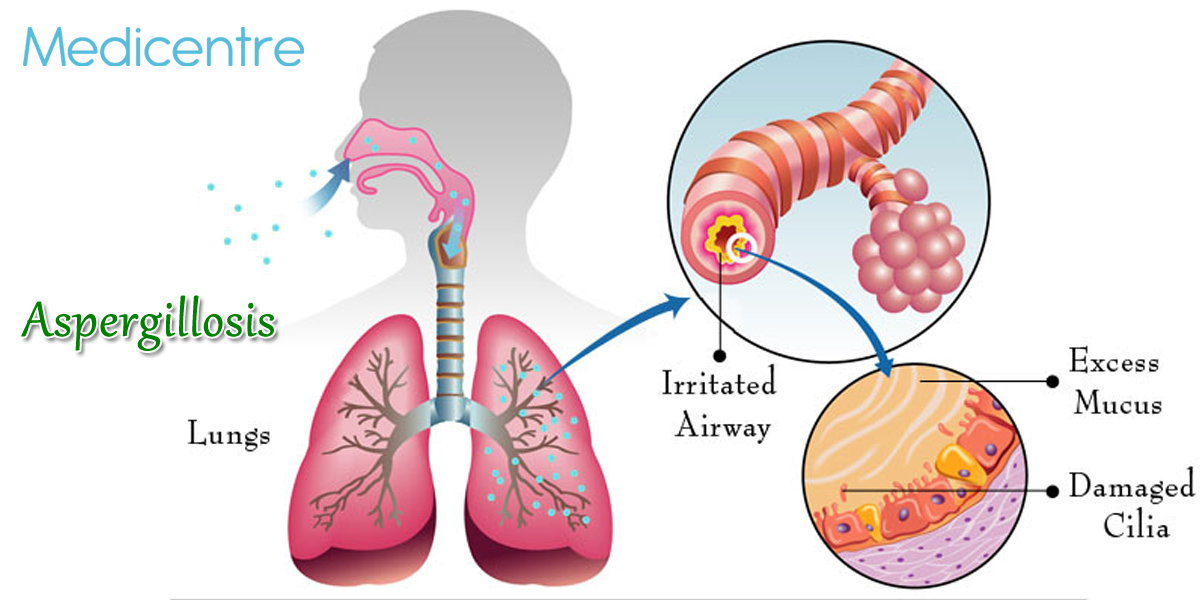 The symptoms of Aspergillosis usually vary with the kind of illness that you develop. Some of the people with cystic fibrosis or asthma usually experience allergic reactions to Aspergillus mold and the symptoms of this condition include:

Sometimes, a tangled fungus fibre may grow in air spaces in lungs as a part of the chronic pulmonary Aspergillosis and it is referred as simple Aspergilloma. It is the benign condition which may not produce any symptoms or may produce mild coughing, wheezing, fatigue, shortness of breath, and unintentional weight loss.

What are the Causes of Aspergillosis?

Aspergillus mold is inevitable. It is found everywhere in decaying leaves outside the house, in compost and on plants, grain crops and trees. You will also find it in spores and it also thrive in air conditioning and heating ducts, insulation and some spices and foods.

Exposing yourself to Aspergillus everyday is not harmful, especially if you are having stronger and healthy immune system. The immune system cells find the mold spores that you inhaled and destroy them. But people with weak immune system are likely to develop Aspergillosis because their body has less amount of infection fighting cells. So, the mold spores take hold of it and invade the lungs and in serious conditions the other parts of the body. Aspergillosis is no contagious from person to person and hence there is nothing to worry.

Diagnosis the ailment which is caused by Aspergillus mold is quite challenging and it depends greatly on the type of Aspergillus infection affecting you. As mentioned the mold spores is available everywhere and it is found sometime in saliva and sputum of healthy people as well. Moreover, it is challenging sometime to differentiate Aspergillus from other mold under microscope. Moreover the symptoms of the disease are also similar to those opf conditions like tuberculosis. Doctors may perform one or more tests mentioned below.

Observation – Single Aspergillomas requires no specific treatment. Medications are also not effective for treating the fungal mass. The Aspergillomas don’t produce any symptoms and can be monitored easily with chest e-ray. If the condition progresses, doctors may prescribe you with antifungal medications

Oral Corticosteroids – This is aimed towards treating allergic bronchopulmanory Aspergillosis and to prevent the existing asthma or cystic fibrosis from getting worse. For such conditions antifungal medications are not effective alone. They need to be administered in combination with corticosteroids so as to minimize the dose of steroids and enhance the functioning of lungs.

Surgery – The final treatment plan for Aspergillosis is surgery and it is only prescribed when antifungal medications are unable to penetrate Aspergillomas well and hence surgery is done to remove the fungal mass. Surgery is also suggested when the bleeding occurs from mass in lungs. Surgery is risky thing and hence doctors may first suggest the patients for embryonisation rather than surgery. This is also complicated process but less risky than surgery.