Bipolar disorder or manic depression is a condition that shows extreme shifts in mood and fluctuations in energy and activity levels which can make daily living difficult.

It is a serious mental illness which, if left untreated, may destroy relationships, weaken career prospects, and seriously influence academic performance. At times, it can lead to suicide.

Diagnosis generally occurs between the ages of 15 and 25 years, but it may occur at any age and affects males and females evenly. 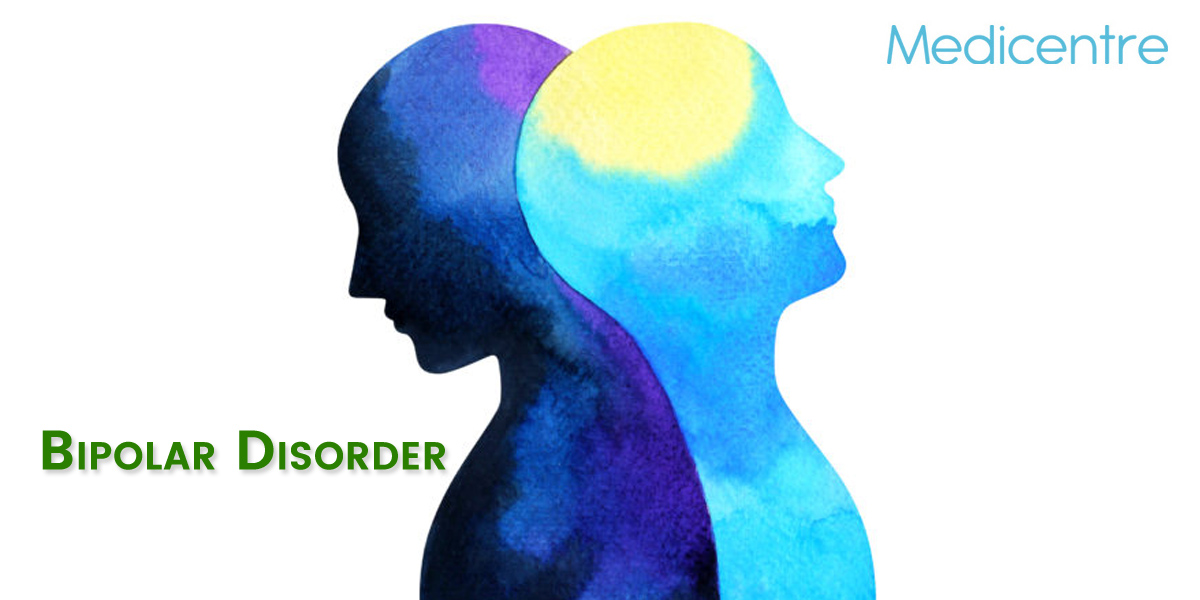 People having bipolar disorder may have phases in which they feel overly happy and energized and other periods of feeling very sad, hopeless, and lethargic. In between those periods, they generally feel normal. You can think of the highs and the lows as two "poles" of mood, that is why it's called "bipolar" disorder.

The term "manic" exposes the times when someone with bipolar disorder feel too excited and confident. These feelings may also involve irritability and impulsive or irresponsible decision-making. Around half of people during mania can also have delusions (considering things that aren't true and that they can't be talked out of) or hallucinations (seeing or hearing things that aren't there).

Hypomania means milder symptoms of mania, in which people do not have delusions or hallucinations, and their high symptoms do not interfere with their everyday life.

The terms "depressive" describes the periods when the individual feels very sad or depressed. The symptoms are the same as those described in major depressive disorder or "clinical depression," a problem in which someone never has manic or hypomanic occurrence.

What are the Symptoms of Bipolar Disorder

In bipolar disorder patients, the remarkable episodes of high and low moods do not follow a set pattern. Somebody may feel the same mood state (manic or depressed) numerous times before switching to the opposite mood. These episodes may take place over a period of weeks, months, and sometimes even years.

Severity varies from person to person and can also change over time, becoming more or less severe.

Symptoms of mania ("the highs"):

In depressive periods ("the lows"), a person with bipolar disorder may have:

Who Gets Bipolar Disorder?

When a person develops bipolar disorder, it typically begins when they're in late adolescence or young adulthood. Infrequently, it can occur earlier in childhood. Bipolar disorder may run in families.

Men and women are evenly prone to get it. Women are somewhat more expected than men to go through "rapid cycling," which is having four or more distinct mood episodes within a year. Women also are likely to spend more time depressed than men with bipolar disorder.

What are the Causes of Bipolar Disorder?

The exact cause of bipolar disorder is not clear, but several factors may be involved, like:

How to Diagnose Bipolar Disorder?

Bipolar disorder is a lifetime condition. Treatment is directed at controlling symptoms. According to your requirements, treatment may include:

Numerous medications are used to treat bipolar disorder. The types and doses of medications prescribed depend on your particular symptoms.

Psychotherapy is a very important part of bipolar disorder treatment and can be offered in individual, family or group settings. Several types of therapy may be useful. These include: